Komla Tsikata is a hard-working Togolese smallholder farmer and part of Deki’s Agricultural Cooperatives Programme, which aims to support small-scale farmers to improve their livelihoods.

In 2020, Komla and 19 other hard-working, determined farmers in the community, formed the Novignon Cooperative. They saw this as the opportunity to improve their livelihoods and benefit from the development training, workshops and support offered by the Deki and IADES Agricultural Cooperative programme.

Komla joined the programme because he saw the opportunity it would bring to increase his knowledge, and skills and help to improve his family’s living conditions.

Since joining the Agricultural Cooperative programme, Komla has been able to attend all the training sessions and workshops available to him and his cooperative and he has now received two livelihood development loans. 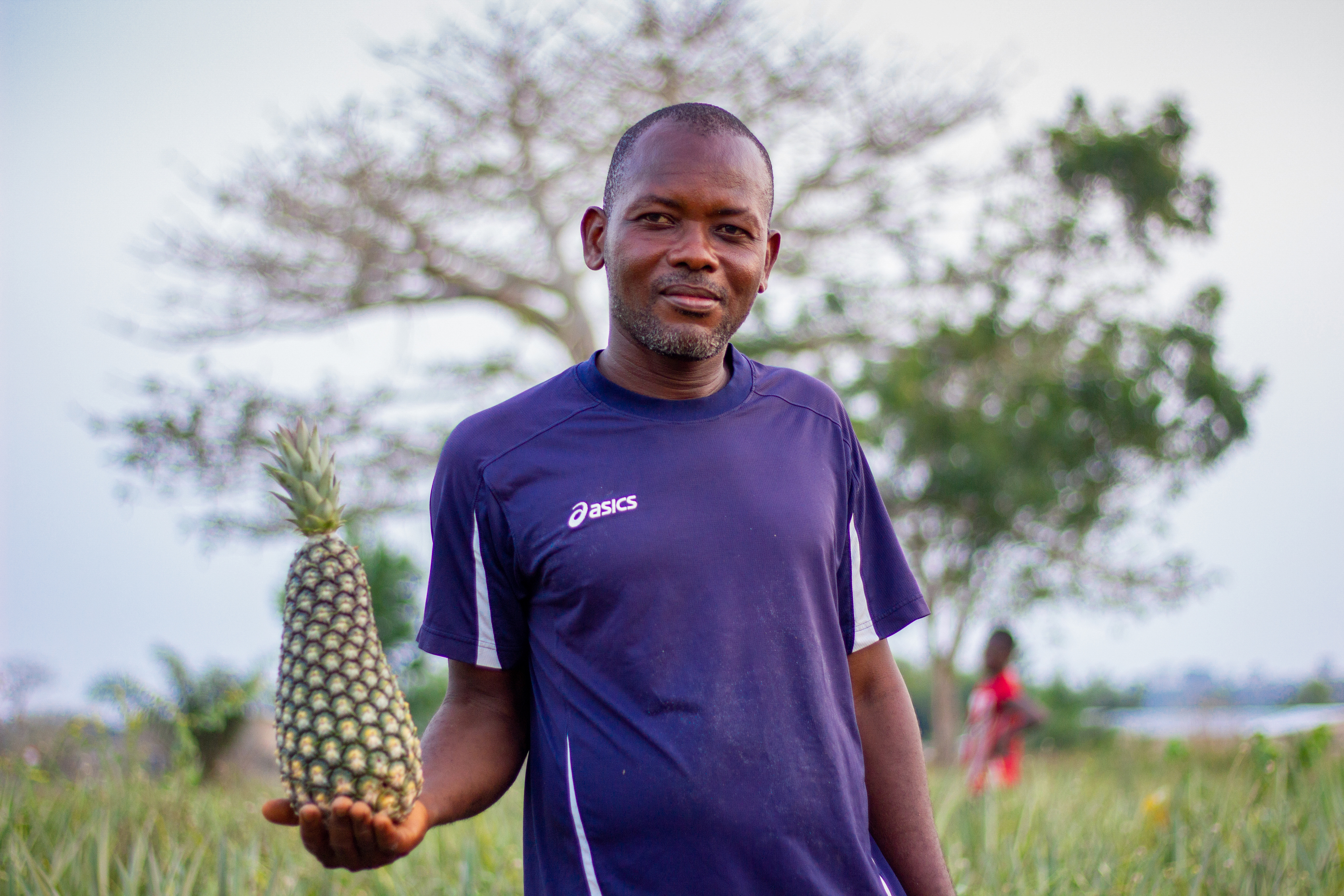 Komla first discovered his entrepreneurial skills while he was a teenager in school and was selling cassava and peanuts to his peers to pay for his school fees. Unfortunately, he struggled to meet all his school expenses and eventually had to leave to work in the fields full time. He had hoped that he could earn enough money to return and finish his secondary education one day. Sadly, with the lack of resources and opportunities available to him, he was never able to do so.

After a chance meeting with one of his old friends from school, Komla was told about the profitability of growing and selling pineapples and that Kevé in the Maritime region, was a good place to grow them due to its tropical climate and remote location.

Komla, now in his early forties, has been a pineapple farmer for over twenty years and lives in  Kevé with his wife Akoly, a hairdresser, and their two young children, who both attend their local primary school.

Before joining the cooperative, Komla had difficulty accessing affordable credit, which would have helped him to invest in his farm, or accessing any training or support and he could only learn through his own trial and error.

Now he is part of the Agricultural Cooperatives Programme, he attends fortnightly meetings with his cooperative, where they can discuss any problems or challenges they face. They also have access to regular training and workshops on issues relating to farming, their businesses and health and social issues. 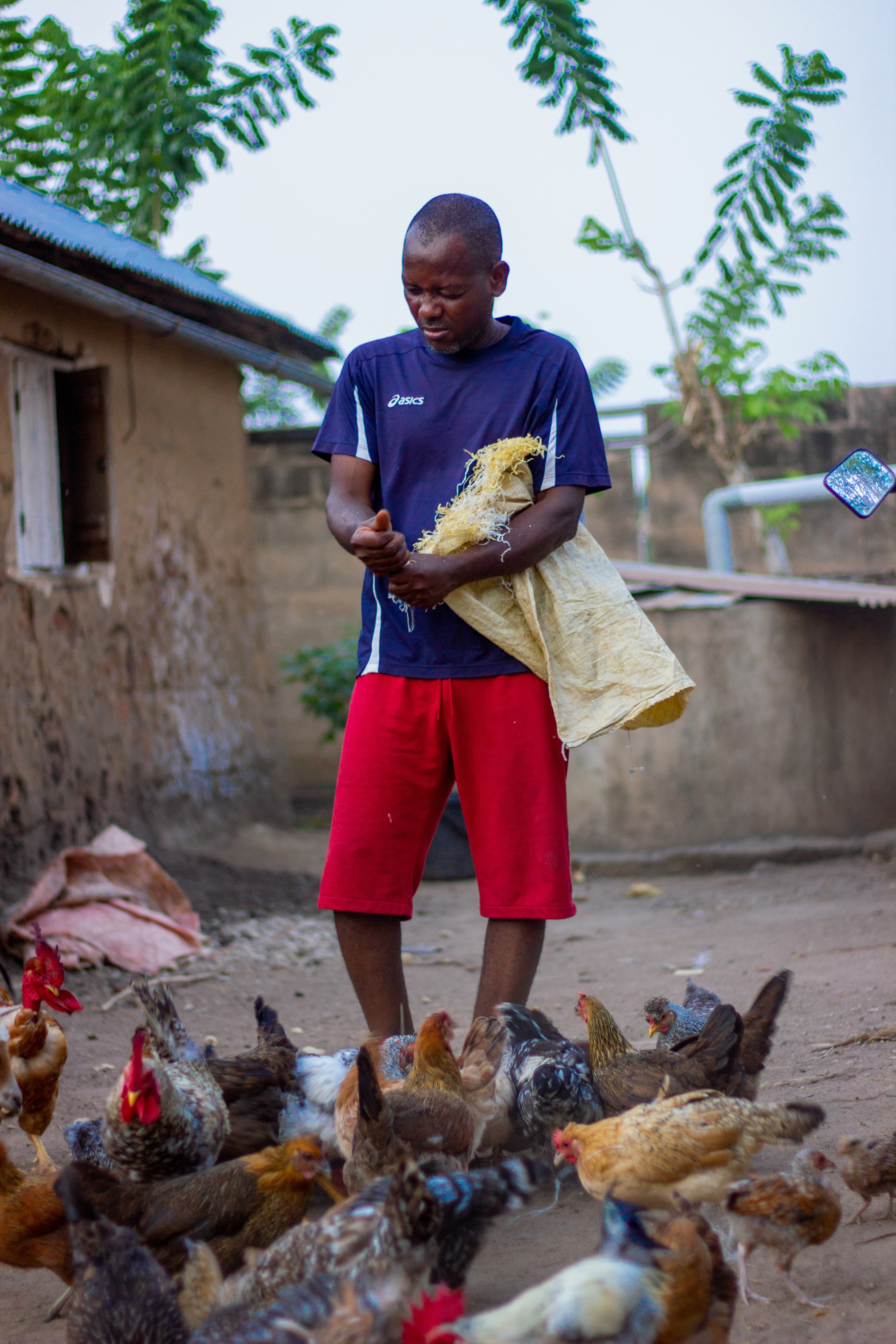 Komla recently attended workshops, run by IADES, on the benefits of product diversification, where he learnt that if he sells similar items together, a customer could buy everything they need at the same time, instead of going to another seller. So now he sells his pineapples with papayas and chickens. He is also reducing his expenses and his waste by feeding the rotten papayas to his chickens.

Diversifying his farm activities will also help Komla become more resilient to climate change. Komla told us he believes that climate change has affected Togo’s rainfall, making the seasons irregular. When he needs the rain, there is none and when it does rain, it floods and causes damage.

Last year the irregular rainfall meant that Komla’s pineapple harvest didn’t make as much as he had anticipated, which adversely affected his income. Learning from this experience, this year Komla will use his Deki loan to further diversify his activities by investing in more chickens and guinea fowl. 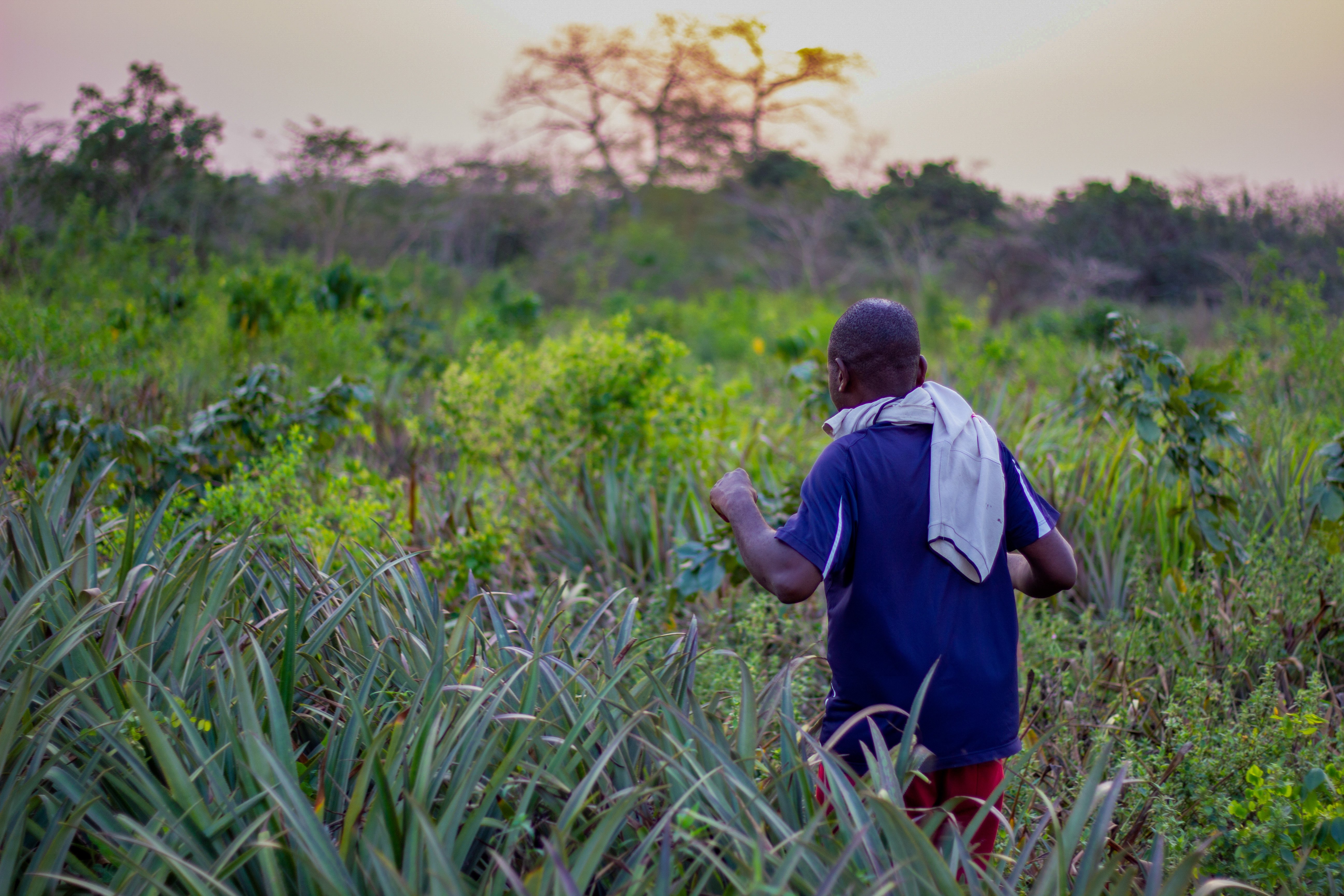 Before joining the Agricultural Cooperative programme, it would have been difficult for Komla to make these investments, he wasn’t able to access credit at an affordable rate of interest. His Deki loans are provided at an interest rate of 2% per month on a declining balance.

‘this is the first time I see the rate so low’

This interest is charged to help cover the additional support the cooperatives receive, such as the training sessions

Komla also told us, that being part of his Cooperative has helped him to reduce expenses and find new markets, since he can pool his resources with the other members. For example, Komla has found that when the cooperative orders seeds or fertiliser in large orders, it doesn’t cost him as much, as they are able to now access wholesale prices.

The Novignon Cooperative have started to make some savings and are currently putting their money together so they can invest in a tractor which will help them to expand the cultivatable area of their land.

Although Komla’s pineapple harvest didn’t make as much income during the last harvest as he had hoped, due to the irregular rain, Komla is still determined to expand the amount of land he currently uses to grow pineapples.

Normally, he would only be able to use one hectare, but he would like to use two or three hectares if he is able to, dependent on the cost. He also hopes to expand the area he uses to grow papaya by half a hectare. Because of the change in weather, he wants to make sure that in case his pineapple harvest suffers again, then he will still have a secure income, which has led him to invest in a further 200 guinea fowl. 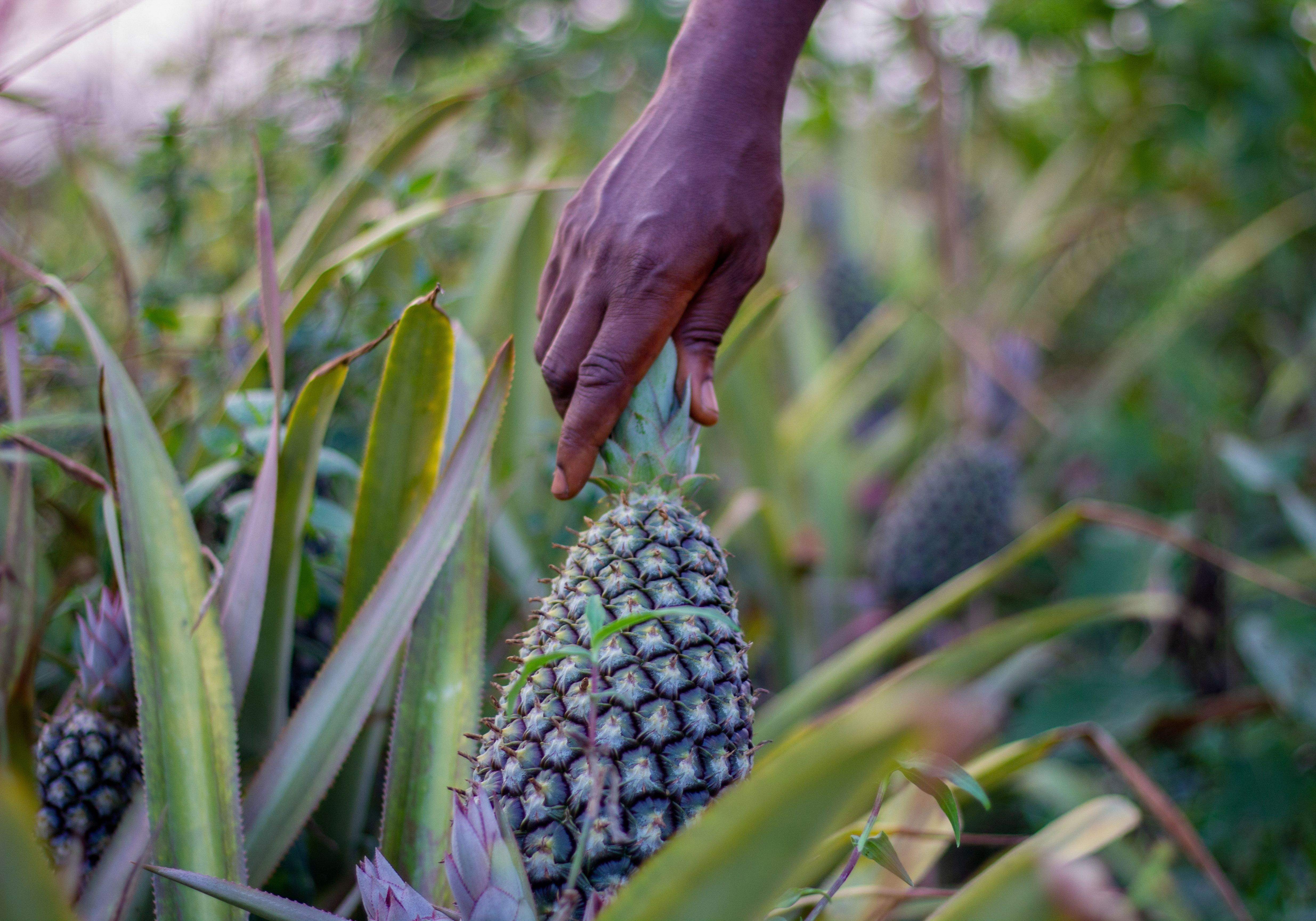 With the income from his farm, Komla has recently managed to make some improvements to his home by replacing their straw roof with corrugated iron sheets which are much more robust. He plans to continue making improvements when he can so he can begin to improve his family’s lives.

The Novignon cooperative’s plans for the future are to continue working hard together to make savings which they will invest in transport to take their produce to market, and for each of the farmers to have a tricycle. One day they would like to be able to invest in a threshing machine to help with the corn harvest. Understanding the threat posed by climate change, Komla added he would also like the cooperative to invest in a solar panel pump so they don’t have to rely solely on rainfall anymore.

Komla would like to send a message to UK donors

“I thank them very much for everything they do, may God protect them” 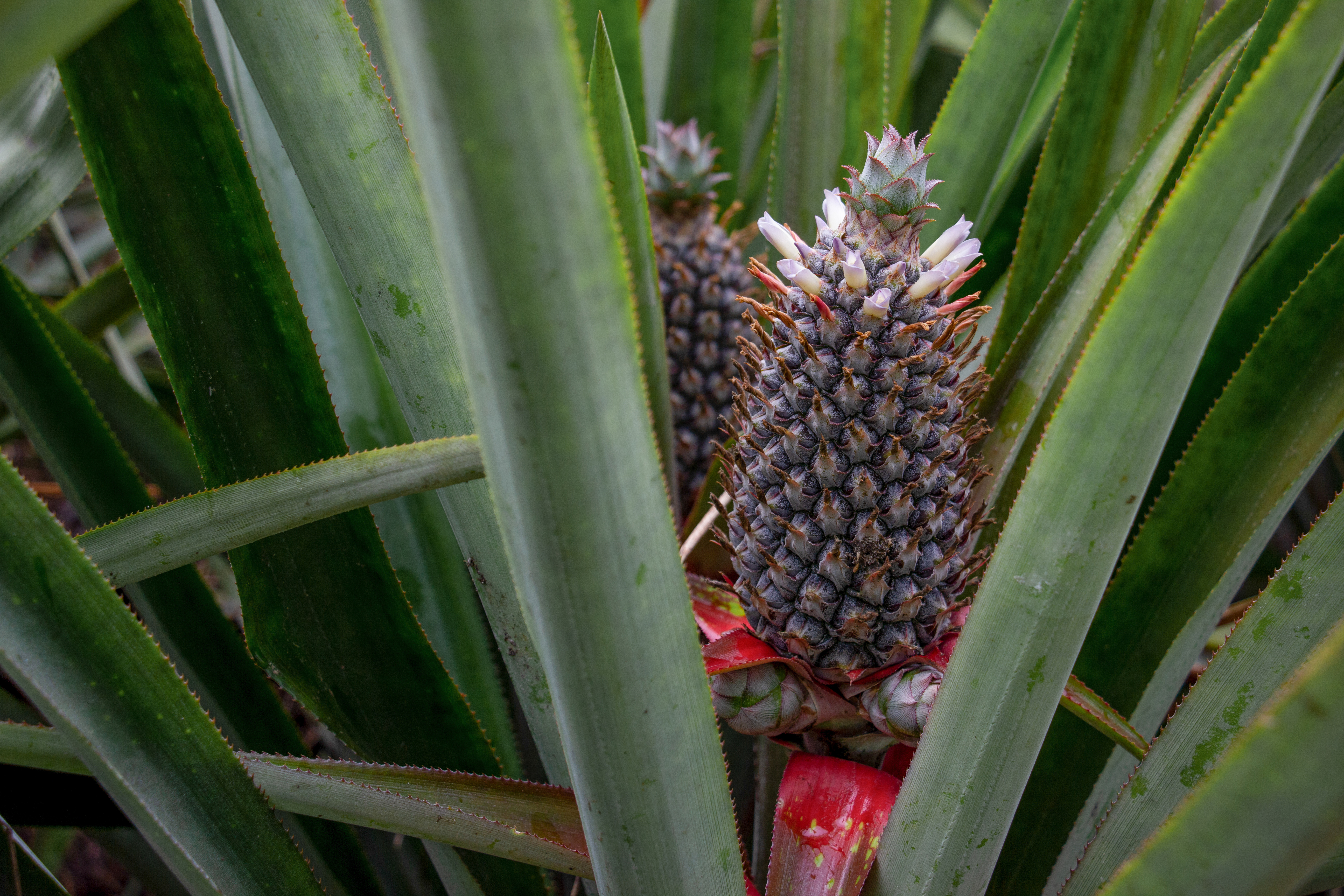 Support the Agricultural Cooperatives and help more farmers like Komla